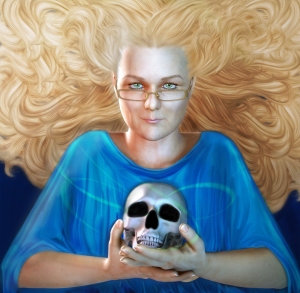 A Non-fiction Piece
by Rayne Hall

Does your novel-in-progress contain a scene where the heroine escapes from danger, with the villain chasing after her? Excellent. Readers love the these scenes.

Here are some techniques to make your escape scene exciting.

Stay in deep Point of View. If possible, write the scene from the fleeing person’s point of view. This means showing only what this person sees, hears and feels. If the PoV character runs for her life, she won’t pause to watch her pursuer, so don’t describe what the pursuer looks like, or how the distance between gradually closes. However, you can describe the sounds the pursuer makes: boots thudding on the asphalt, clanking armour, yells, curses.

Chases are fast-paced, so use fast-pace writing techniques: short paragraphs, short sentences, short words. But if the chase or escape spreads over more than a few paragraphs, try to vary the pace. This will make it more exciting. When she runs fast, use very short sentences – even sentence fragments – and mostly single-syllabic words. They create a sense of breathlessness and fear. When she’s hiding, when she’s struggling to climb up a facade inch by inch, when the pursuers have trapped her and when the policeman handcuffs her, use medium-length sentences and words.

The reader’s sympathy always lies with the fleeing person. You can increase this effect if several people are hounding the refugee. Nothing stirs reader emotion more than a situation of many against one. If possible, build tension by introducing the other pursuers gradually. At first, she runs only from one foe. Just when she thinks she may get away, one of the villain’s henchmen comes from another alley. And then a third. In addition, you can give the pursuer advantages over the refugee: physical health, weapons, technology.

4. Danger from the Surroundings

Increase the tension by shifting the action to increasingly dangerous ground. As your heroine flees from the evil villain, she moves towards quicksand, a crumbling bridge, a cliff edge or a ravine. Now she must decide rapidly which poses the greater danger – pursuer or location – and take the risk.

When a person runs from danger, a cocktail of chemicals gets released in the brain. It includes adrenalin and other substances which dull pain and give stamina but also impair motor skills. Your heroine’s movements won’t be as coordinated as they usually are, so she may miss her footing, stumble or slip. This is all the more likely because in her hurry, she won’t examine the ground where she’s treading.

The running person is probably out of breath, struggling to get enough oxygen. Her chest may feel like it’s about to burst. Her heart thuds loudly, not only in her chest but in her head. This thudding continues even when she stops running, and while she’s hiding, the heartbeat in her head may be the loudest noise she hears.

When the pursuer catches up with her, she puts up a fight. She does not need to win, but readers will respect her if she manages to inflict some hurt on him before he overpowers her. This is better than if she surrenders meekly, or if she faints and comes to again in the dungeon.

If you’re a writer and planning or revising a scene in which your protagonist flees from danger and want to discuss your ideas, please leave a comment. We love answering questions.

Rayne Hall has published more than fifty books in several languages under several pen names with several publishers in several genres, mostly fantasy, horror and non-fiction. She is the author of the bestselling Writer’s Craft series and editor of the Ten Tales short story anthologies.

She is a trained publishing manager, holds a masters degree in Creative Writing, and has worked in the publishing industry for over thirty years.

Having lived in Germany, China, Mongolia and Nepal, she has now settled in a small dilapidated town of former Victorian grandeur on the south coast of England where she enjoys reading, gardening and long walks along the seashore. She shares her home with a black cat adopted from the cat shelter. Sulu likes to lie on the desk and snuggle into Rayne’s arms when she’s writing.

You can follow her on Twitter http://twitter.com/RayneHall where she posts advice for writers, funny cartoons and cute pictures of her cat.