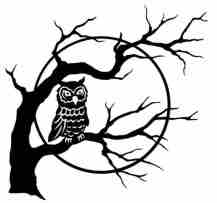 Pollyanna Prewitt followed her father up the cracked sidewalk to the dilapidated house on the edge of the graveyard. She stopped to tie her shoe.

“Come on, Polly, “Lester said. He set the shovel down, fished the house key out of his back pocket and waited for her. “It’s almost dark and the fog’s moving in.”

Pollyanna straightened up and looked past him at their house. Two of the windows facing the street were cracked. Two black shutters dangled precariously from the window frames on the turret and leafless vines crawled up the bricks toward the roof. The dark wooden front door looked anything but inviting and its wreath of dead summer flowers gave it the kiss of death.

We don’t need to decorate for Halloween. Pollyanna thought, although a big pumpkin on the porch might look nice.

“I don’t have time, Dad. Remember? It’s Halloween and I’m going to the dance tonight at Batten Kill High. I told you at breakfast.”

“I forgot, ” Lester said, in a tired voice. “Dug three graves today. I’m bushed.” He pulled a book of matches out of his shirt pocket and lit the kindling in the old stone fireplace. “Guess I’ll just grab a toddy and settle in.”

Pollyanna ran upstairs and changed into the gypsy costume she’d found at Goodwill earlier in the week. The multicolored skirt was cut on the bias, and when she twirled to look at herself in the mirror, it swirled like a rainbow around her knees. She pulled on a pair of tall black boots, tied on the red bandanna and went downstairs.

Her father was snoring up a storm on the couch in front of the fire. Polly blew him a kiss and went out into the night. The neighborhood barn owl perched in the oak tree near the porch. He blinked his round, yellow eyes and bobbed his head.

“Who. Who,” he intoned low in his throat, watching Polly skip down the steps.

I’m late, she thought. The quickest way to the school was through the burial ground. Pushing her way through the thick hedge on the edge of the lawn, she entered the graveyard. The night was dark; clouds covered the moon and it felt like rain. The owl screeched and flew past, grazing the top of her head with his enormous wings. “Who. Who,” he droned in a dreary monotone.

She screamed and tripped over a headstone.

“I’m not afraid. Who are you?” Pollyanna looked around, but couldn’t see him in the shadows. “What are you doing here?”

“I’m Ollie Nigh. Aren’t you scared in the cemetery at night?”

“No. I live in that house over there. My father’s the gravedigger. I cut through the cemetery all the time,” she said, following his voice so she could check him out. He wore a werewolf mask—one of those big ones that covered his whole head–and jeans and a Batten Kill High letter jacket. Pollyanna sniffed. He smelled like moss and pine needles. “Nice costume. Are you going to the dance too?”

The gymnasium was packed with kids dressed up weird—the usual ghouls, zombies, pirates, angels, cats and two President Obamas. Pollyanna lost sight of Ollie the minute they walked through the door. She joined her friends and forgot all about him until the dance was over.

Walking out of the gym, she noticed him standing all alone in front of the school. The rain that had threatened to fall earlier was coming down hard. Polly shivered and hunched her shoulders to keep warm.

“Here take my jacket,” Ollie said, walking over and throwing his letter jacket around her. “I’ll walk you home.”

Polly stuck her arms through the sleeves and zipped it up. He must have been out here for a while, she thought. His jacket is colder than I am.

They headed down the street and into the cemetery. Thunder rumbled, and off in the distance she heard the owl. When they got to Polly’s house, her father was standing on the porch, waiting.

“Polly,” he said. “I don’t like you walkin’ alone at night through the graveyard. Crazy things happen on dark nights like this.”

Pulling the jacket tight around her, she skipped up the porch steps. I wonder what sport he plays, she thought, burying her nose in the silky lining. She breathed in the earthy smell.

The next morning Polly left early so she could stop at the coach’s office before class. She handed him the jacket. “Can you give this to Ollie for me?”

“Ain’t no Ollie on any team I know,” Coach Robbins said, examining the coat. “And this thing’s gotta be thirty years old. Musty smelling, too.”

Reaching behind his desk, he pulled an old yearbook off the bookshelf and thumbed through it. He sat back in his chair, frowned a bit, and read,. “Says here, young lady, that Ollie Nigh died on October 31st, 1969. He was 18 years old and just made the football team. Only played two games. His parents buried him in the old section of Hillside Cemetery, dressed in his school letter jacket.”