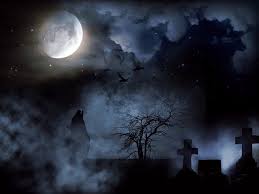 It was a dark and stormy night. The rain had paused but the fickle moon often hid behind the thunderheads, plunging Morganville into Stygian darkness. As I neared the cemetery, my 1975 Hornet coughed, sputtered, and rolled to a stop. I did the usual things, but it wouldn’t restart. Another car approached, and I tried to flag it down. They just drove on by, tooting as if I’d wished them a happy Halloween. “Darn!” I said.

It was 6:00 pm. Fred’s Petro-Serve garage lay just the other side of the graveyard and was open till 6:30. I could walk the long way, or I could shortcut across the cemetery. The time saved might mean reaching Fred’s before closing time instead of finding the garage dark and deserted.

Many in Morganville said the cemetery was haunted, reporting groans and shrieks as they walked nearby. Ed Suggins claimed he’d seen eerie lights wafting among the graves one night. Not superstitious, I leapt and grasped the top of the wall, then scrabbled upward until I looked down into the darkness of the cemetery. I had no idea what lay below me, but grass was a pretty good bet. I jumped.

Into ankle deep mud, with a sickening, squutching sound. It seemed, somehow, like a raspberry directed at me. I was less than three feet into the cemetery and already paranoid. I pulled up on my left foot. Miraculously it came free. So far, so good. I put that foot down and found that my right foot, despite the depth of the gooey mud, rose up easily. My shoe did not, however, being still submerged in muck. I heard a forlorn bloop-bloop as the air in my Florsheim surrendered to the ooze.

“Dammit,” I muttered, doing a half-pirouette to avoid falling. I remained upright, but in the darkness, I now had no idea where my shoe was. Nor was I eager to plunge my foot back into it. I stood on one leg for a long time before deciding I must put my foot down eventually. I took a long step, hoping to reach firmer soil, but splashed down into more mud.

I pulled up on my left foot, and lost that shoe to the ooze, too. “Dammit!” At least, I thought, I haven’t fallen. I stomped my left foot down beside my right and landed on firm ground. Too firm: a rock, and I bruised my foot. “Poop!” I exclaimed, grabbing my foot and holding it. I then felt the mud beneath my right foot start to flow. I flowed with it. “Damnation!” said I, plunging my left foot down behind me, painfully.

One foot shot forward, the other back. I windmilled my arms as my feet continued to slide, and slowly fell backwards into the goo, swearing. I struggled free, stood, staggered, spun, swore again, and plunged face forward into the same muck I’d just escaped from.

By the time I was standing and had my balance, I was mud from head to toe. My shoes and socks were somewhere in the mire. I slogged onward, determined to make it to Fred’s before he closed.

Looking ahead, I saw the mist at the far end of the cemetery glowing in the lights of the Petro-Serve station. That reminded me of Fred and his sense of humor. He would find my plight a matter for profound and incessant jocularity. I toyed with the idea of undressing and scrubbing most of the mud off my suit, but soon discarded the notion. No, I must make the 6:30 deadline. Must. The moon hid again, and I slogged on in darkness, focusing on the distant lights.

The next thing I knew, I’d fallen into a deep puddle. I rolled over, snorting, coughing, and spitting mud and water. It was totally dark all around me, no sign of the Petro-Serve lights. I got up, staggered ahead and ran into a wall. Had I struck a crypt? I didn’t recall any crypts in the cemetery. It must be new.

I tried to walk around the structure, but immediately hit another wall. I did this again and again, until I realized I was surrounded by walls. How have I gotten inside this crypt!? I reached out and felt the wall. Dirt. I’d fallen into an open grave. I must get out. I’ll be late, I thought.

I jumped up and reached for the edge of the grave, but fell short. I tried again and again. How deep is this thing? I ran along the diagonal of the pit, hoping to get more momentum. My fingers touched grass that time, but slipped off, and I fell back into the mud puddle.

I finally gave up. It had to be past 6:30. I yelled for help until too hoarse to continue. No one came. I leaned against the dirt and croaked a terrible word that starts with…well, you know.

Many minutes went by. I gradually slid down and sat in the cold puddle. I dozed, I don’t know for how long. Suddenly I awoke. Had I heard someone mumbling? A ghost!

No! Ghosts don’t pray. Whoever this was, was muttering a prayer, asking for protection. And he was making his way towards me across the cemetery. Surely he’d rescue me! Maybe the other car had told Fred they’d seen me stuck there. Maybe this was Fred, looking for me. Before I could speak, whoever it was came plunging down into the grave, creating a gigantic splash. “Fudge!” he shrieked. I heard him stand and frantically leap again and again, just as I had done, trying to reach the edge of the grave. As the moon emerged from behind a cloud, I smiled, stood, and put my hand on his shoulder.